Why Have A Garand?

I love that photo and statement from the GI. Too bad that today's media doesn't have the cojones to write something like that.

This project has been a long time in the making.

I bought my CMP Garand a few years ago. My gal is a Springfield Service Grade, which was built between August-September 1944. If you would like to see the build date of your Garand, click here.

This is how she looked when I received her. 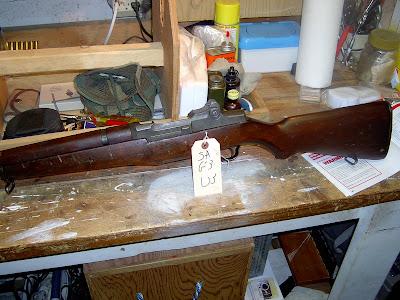 When I first got my Garand, I figured that because this was a Service Grade, which meant that the rifle was fit for military service in regards to condition and accuracy, that I would just be able to go out to the range and presto-bingo shoot 1-2" groups all day long.

So I bought some military surplus Korean ammo (more on that later) and headed out to the range.

My first time to the range I was lucky to have two or three rounds in a 5" group. THEN after the rifle heated up, THOSE groups got even larger.

So it was time to work on this rifle.

There are a few things that you should do before starting an accurizing project of this size. First of all I would highly suggest that you go to the CMP website and print off the entire instructions on How To Detail Strip and Re-Assemble your Garand. This will be a fairly large print job, so make sure you have a 3 ring binder and hole punch to keep this in order.

Now, a word about this project. There are two ways you can go about accurizing your Garand. First is to take some (re:a bunch) money and send it off to a 'Garand Smith.' You can get as much accuracy as you can afford. Please don't get me wrong there are things that a 'Smith' can do that you and I cannot. It's a matter of skill, experience and equipment.

Secondly, you can use your God given skills to do some modifications to your own rifle, thereby saving money and in return getting a deeper appreciation for the inner workings and engineering of this marvelous battle rifle. She might not be as pretty as a reparked, restocked WW2 work of art, but she'll go bang every time you pull the trigger and will be much more accurate than what you have now.

What I am posting here is minor cost mods. The tools necessary are your normal gunsmithing screwdrivers, Dremel tool, files, chisels, sandpaper and elbow grease (plenty of that).

I will assume that you have taken your rifle to the range and discovered how she shoots.

So, take some time to break down your rifle, and clean it. If you have a rifle like mine, the barrel spec'd out fairly decent, but never was able to really get a clean patch when cleaning. 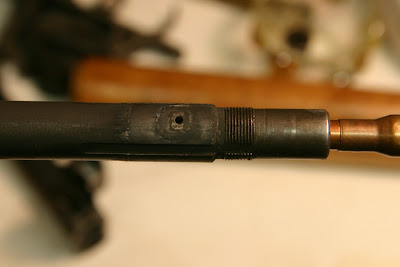 I'll explain why the crud keeps on coming.

Back in the 'day.' The Garand was designed for one purpose, and that was to fight and to be maintained by the average GI Joe. Now if you've served in the military you'll know that not every guy was neat, tidy or detail oriented.

The average M1 was used and abused. When the rifle became SNAFU'd it would go to an armorer for repair. The ammo used during WW2 and Korea was primed with corrosive primers and sealed with a substance called 'asphaltum.' Asphaltum is exactly as it sounds...liquid and thin tar like stuff. The ammo was sealed with this stuff to prevent water damage. In the Pacific theater, the Japanese didn't seal their ammo, and many of their soldiers lost their lives from water damaged rounds.

Now, what happens when you have tar sealed rounds fired through a barrel? It tends to accumulate and harden. Now, combine that with corrosive primer residue, improper cleaning and battlefield conditions....you get the picture.

I still am working on getting clean patches out of my rifle. I use Kroils and a brush, and will alternate that with Hoppes and a product called Blue Wonder.
To be candid, I have tried almost everything out there and these three seem to get the lion's share of use and success. 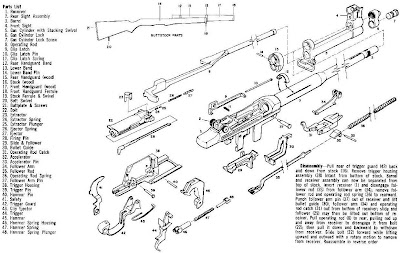 Let's start by doing some simple tests to determine issues.

First of all make sure your rifle is UNLOADED.

Now take your barreled receiver off of the stock. Remove the Op Rod Spring and the Bullet Guide components. Leave the Bolt and Op Rod on. You should be able to move the Op Rod back and forth without the pressure of the spring.

Tilt your Barreled action downward and see if the Op Rod slides easily into the Gas Cylinder. Tilt it back and see if it returns freely. Your Op Rod/Bolt should slide easily into and out of battery. If it doesn't then you'll have accuracy issues.

The first thing to do is to make sure your Op Rod is CORRECTLY bent. Now, this is the only thing that you'll need to send off to have it done properly. Please don't hammer your Op Rod. There is a fellow who does a marvelous and FAST job of correctly working your Op Rod. Jim Schwartz is well respected in the Garand community and has the equipment to correctly spec your Op Rod. Jim's rates are very, very reasonable (in the $20 range)and the turn around time is just a few days. Contact him via email at JSwartz280@aol.com

Now if your Op Rod slides in perfectly, do you feel ANY friction between the Rod and the metal plate in your Front Hand Grip. A quick way to check this is to use a THIN line of Lubriplate on the metal strip and see if any gets on your Op Rod. If it does, then we'll work on that.

Next grab your barreled action by the gas cylinder and see if it twists in your hand. The Gas Cylinder should be rock solid on your barrel. We'll work on that later.

Now take a 1" strip of thin paper and slide it between the Upper Grip and the Barrel. Slide this back and forth to see if the wood rubs on the barrel at any point. This Guard should only touch the barrel at the metal clip. If there is any wood that is making contact, then you'll need to remove that.

As I'm sure you've noticed, the Garand isn't a simple system. The power of the cartridges and the age of your equipment makes this proje3ct not only challenging but very fulfilling to accomplish.


Our plan of action is as follows:

1. Remove the oils/cosmoline from the stock and then seal up the bare wood.

2. Remove any wood that is touching the barrel.

3. Glass Bed the barreled action to create a perfect lock up.

4. Secure both the Gas Cylinder and the Lower Band

Unlike the project I did with the Ruger 10/22, this one will have alot of photos...and will take longer to publish. So please bear with me as I write this over the next week or so.

In the mean time, check your Op Rod, send it to Jim Schwartz if needed and order some Acra Glas Gel.

This isn't a job that will take a couple of hours, it will take some time. So get ready.
Posted by JMurman at 6:54 AM